More people on this planet own a cell phone, than have access to a toilet.  Thousands of people die every day, due to a lack of clean water.  3.575 million people die each year due to water related disease and 1.4 million of these people are children.  Animal agriculture contributes largely to the pollution of streams, rivers and oceans across the world.  Not only does this affect the animals and the environment but it greatly affects humans too. 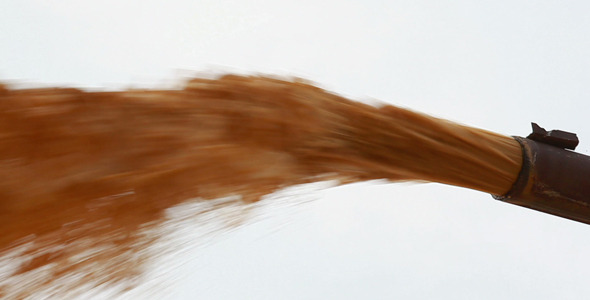 How does animal agriculture contribute to water pollution?

Most of the freshwater that the livestock industry uses goes back into the environment as manure and wastewater (pollution).  One dairy cow produces approximately 120 pounds of manure each day, which is equal to the waste produced by 20-40 people. Animal waste can contain pollutants like hormones, antibiotics, heavy metals, nitrate and ammonia. Some of these pollutants will end up in our rivers and underground drinking water.  Unlike

human waste, animal excrement from factory farms is not processed as sewage—making it about 500 times more concentrated than treated human waste, while leaving pathogens (like Salmonella and E. coli) and volatile chemicals intact.  Excrement from animal waste can seep through the soil into nearby groundwater and overflow during storms.  In 1995, for example, an eight-acre pig-manure lagoon in North Carolina ruptured, spilling 25 million gallons of untreated waste into the New River, which killed about 10 million fish.

How does this affect humans?

UNICEF reports that Diarrhoea is the second leading cause of death among children under five globally & kills more young children than AIDS, malaria and measles combined. Diarrhoea is largely due to lack of safe drinking water, sanitation & hygiene. Children in poor environments who lack clean drinking water, often carry 1,000 parasitic worms in their bodies at one time and millions of children spend hours each day, trying to collect water from distant & often polluted sources.

How Can I Help?

By not supporting and funding this industry.  It is extremely damaging to the environment, the animals and human health.  By adopting a plant-based diet you can help stop the pollution of our precious oceans, rivers and streams.  To learn more about transitioning to this lifestyle, visit the Becoming Vegan page and to learn more about how animal agriculture damages the planet visit The Planet page.

Related posts on The Vegan Lily:

If we don’t begin to make changes in our diets soon then we’re going to suffer the consequences in just a few decades.  With the amount of information out there about how animal agriculture is damaging the planet, eating animal products is simply unjustifiable. We only have one planet and it’s being rapidly destroyed.  Share this post if you think it was helpful or informative.  The key to reducing the amount of animal consumption is to educate as many people as possible. Share buttons are below. Thank you.

2 thoughts on “How You Can Help Stop Water Pollution”